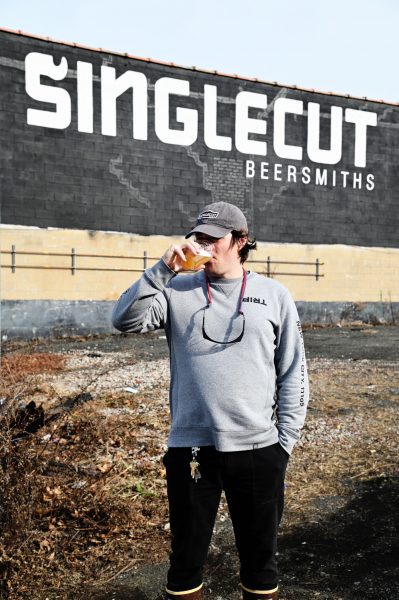 “I descend from my comfortable perch above the Tap Room, and pick my way through the tank farm – towering stainless steel fermentation vessels with a treacherous tangle of hoses at my feet – to a flight of stairs I’ve never used before. I’m going to a far-flung corner of the brewery, to a mysterious place called ‘The Brewers’ Office’, of which I’ve heard only whispers. I’m heading to this outpost to meet with the mastermind behind the newest rolling SingleCut billboard, brewer Blaise Camerzell. His work is now featured prominently across a 26-foot fridge truck rolling around NY thanks to our distribution partners at Sarene Craft Beverage. We stand on the gangway over the tanks as another brewer, Alex, calls out ’20 minutes to knockout!’ I don’t know what that means, and now I’m nervous. 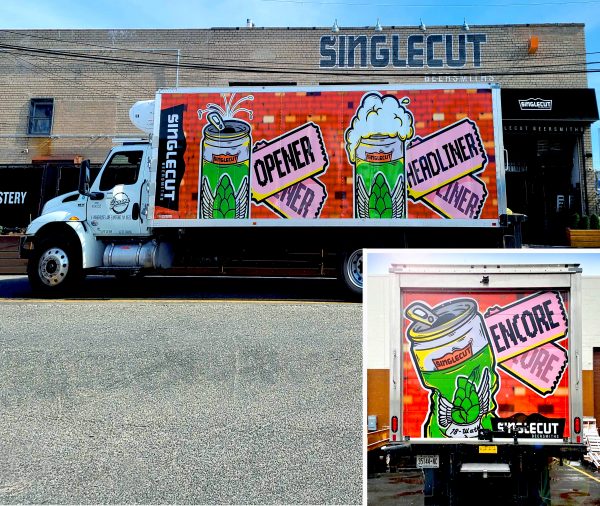 Willy: Blaise, thanks for taking the time to talk with me – I’d love to ask you some questions about the new truck! Firstly, what are we looking at?

Blaise: We’re looking at Opener, Headliner and Encore — three 18-Watts, 3 transitions of a beer can.

WM: Where’d the inspiration come from?

BC: The triad idea was Rich [editor’s note: Rich Buceta, Founder and CCO], and I added my style. My style is very cartoon-y, sticker, graffiti-inspired.

WM: Where did the graffiti style come from?

BC: It’s something I’ve done since I was a kid.

WM: Who are your influences?

BC: One of my biggest influences is Lance Inkwell, he does a lot of the “rubber-hose” style, like 50’s cartoon-ish. Another big one is Viking Art Studios. This last one’s a curve ball but basically anything by Butch Hartman, the guy who did ‘Fairly Oddparents’ and ‘Danny Phantom’ – he’s one of my absolute favorites.

WM: Other than the Sarene truck, anywhere else we can see your work?

BC: All over Astoria. I put up stickers everywhere. I’ve been making stickers for 3 years. I hopped off the graffiti scene and went over to sticker bombing.

BC: I’m working on a project for the REDACTED pop-up. It’s a very different style than I’m used to – and it’s almost like a puzzle. It has a lot of different elements running through it — you have to see it.

WM: That’s what we call a ‘big market tease’. Moral of the story is the folks have to go to REDACTED to see more of Blaise’s work.

As I was leaving, Blaise tracked me down and showed me his other recent project: bad-ass needlepoint designs. The guy’s got vision, that’s for sure.”