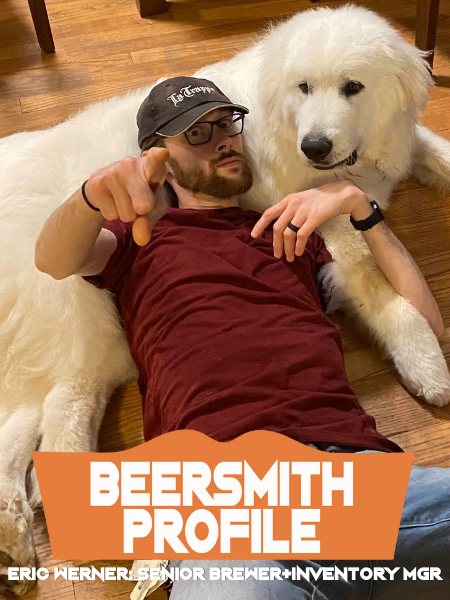 A first of many Beersmith Profiles, meet Eric Werner, Senior Brewer and Inventory Manager for Team SingleCut.  This Q&A will give you a peak inside one of the key Beersmiths behind the taste of SingleCut including Eric’s career progression within SingleCut, the reason for his love behind the brand and what he hopes to see as part of SingleCut future.

Q: What is your role at SingleCut?
A: First and foremost I’m a mainstay brewer; I also oversee/supervise the brewing/cellar team and manage raw material inventory at SingleCut North.

Q: How did you first learn about SingleCut?
A: My now Father-in-law first introduced me to the brand, vocally at least; he used to work in the city and had visited the brewery on occasion during its early years and enjoyed the lagers that were being offered (19-33 and JAN). Later on I began finding bottles of some hoppy releases at the local bottle shop I was working at, and the fresh potency of the beer’s profile was a refreshing deviation from stale counterparts that would typically reside on a bottle shop shelf.

Q: How has SingleCut helped you in your career development?
A: Simply put, Mr. Rich Buceta went out on a limb to give me a shot working on his production floor when I had no other experience in the field. All I had was an honest desire to learn and develop the skills that would be needed to become a member of the commercial brewing community. I had left behind aspirations of pursuing a path of academic research, and while attempting to penetrate the craft beer industry I was beginning to lose motivation in the sales positions I held at that time. Being granted that first position in Queens allowed me to truly change the direction of my occupational path and dedicate all of my energy to becoming an active member of the craft beer/brewing industry.

Q: If you could pick one music genre that fits your personality, what would it be?
A: Oh dang…that’s a tough one! Perhaps Funk, as I try to move through each day with an air of lightheartedness and, for lack of a better definition, simplistic fun. Plus, each work day on site has its own rhythm and I feel most successful when I can lock into this flow and ride the day to its end. To me Funk is all about that pocket, all about that rhythm section! I’m sure there’s a better answer out there though…ask anyone, they’ll tell ya I don’t quite stick to a singular genre.

Q: If you could change rolls for a day at SingleCut, what position would it be?
A: I’ve spent so much time brewing and cellaring our products, and yet I still know so little about the mechanics of our packaging department. I guess I’d like to jump in that saddle for a short while to get a handle on the final stage of our production processes.

Q: What advice do you have for prospective candidates?
A: An honest love for the industry and a true desire to shepherd the product are miraculous fuel in this field! The workload can get stacked a bit high, the days can grow long and the hours can fall into obscure territory…so a genuine appreciation for the work, for the end goal, will almost certainly help one retain a positive outlook through any and all possible discomfort! The road will always get a bit rocky, but just keep on truckin’! You’re brewing beer after all! (I apologize for that cliché, it just worked so well)

Q: What are 3 words to describe your work day?
A: Caffeinated, Moist, Loud. Yup, those hit the nail on the head!

Q: What do you find the most challenging at SingleCut?
A: For me currently, the greatest challenge is probably maintaining a healthy balance between work and my personal life. I’ve lost this balance at times trying to accomplish every little task at hand, attempting to “clear the plate” if you will. But there’s always more work to be done, there are always more tasks that emerge, and thus the docket is never truly clear. So I have to consistently triage the ever present workload in order to reestablish this balance for the sake of my own mental health and that of those I hold dear to me.

Q: What do you like most about SingleCut?
A: I’ve always enjoyed the informal and sometimes silly culture that surrounds the brand. From our snarky “mascot” Sir Rulpsen to the occasional gem of a Monty Python reference, and all the way down to the stream of obscure cartoons that may be playing in the taprooms beside some novel record you’ve never heard before, there’s always been a pleasant sense of whimsy that I’ve consistently vibed with. As an honestly goofy soul myself, through and through, SingleCut has always felt like a place in which I could just hang loose and be myself without fear of judgement. This wealth of laid-back acceptance is an element that I cherish!

Q: What drew you to SingleCut originally? And how has SingleCut changed since?
A: Having been recently exposed to the flavor saturated liquids coming out of The Alchemist’s Vermont brewery in the year 2014, SingleCut’s bottles were absolutely comparable offerings that had begun landing on my proverbial doorstep. No longer did I need to venture into the city or out of state for those heavily hopped, excessively pungent brews that I had continued to crave…I could now just scoop ’em up fresh at my local bottle shop! Plus that whimsy came into play almost immediately with a semi-unspoken little treasure hunt game attached to the occasional “rare” bottle cap that you may find. The brews were heady and the marketing felt fun; this was a brand that I could get behind.
I think I can honestly declare that the company has almost entirely retained the very same branding aura that initially drew me in. If anything its really only my perception of the company that has shifted now that I’ve become one of the cogs working behind the curtain. In the infancy of my tenure with the company down in Queens there was definitely an improvisational element to the production of our brews that inherently led to more pronounced batch-to-batch variability. Now that we’ve upgraded to our North facility and acquired such a wealth of talent and equipment, we’ve absolutely developed greater precision with which we brew each batch. This has allowed us to hone the repeatability of our recipe execution and really dial in a consistent product output.

Q: What has been your favorite project at SingleCut?
A: I’ve always enjoyed the process of producing Kim. With a sea of kettle sour releases in the market, sticking to a sour-mash procedure keeps this SKU feeling unique while also harnessing some of the complexities of wild/mixed culture fermentation. The final product’s flavor profile has always felt like it had a bit more of a nuanced presence than the average kettle-sour, which is almost certainly derived from its sour-mashed roots. On top of that, we used to ferment that special wort using lager yeast! These elements together really made this recipe feel incomparable.

Q: What is on your wish list for the next 10 years SingleCut?
A: As I continue to grow with the company, I’d like to spend more of my mental real estate exploring the culinary elements of commercial brewing and contemplating the boundless minutia of recipe design. I’ve spent so much time physically working, owning and optimizing the mechanical side of production, and this has remained my primary goal; after all this is work that I love, but its work that doesn’t leave much spare time for extracurricular development. A goal of mine is undoubtedly to find more time to develop and eventually master the finer elements of theory and successful recipe development. It would become a joy all of its own to craft a thoughtful recipe on paper, only to bring it to life with my own hands and nurture that lil baby all the way to a 16 oz can. Nothing comes easy though, and the notion that an infantile recipe would be a success with one turn of the brewhouse remains a pipedream at best. So I suppose a supplemental goal, and arguably a more beneficial goal, would be to assist in the implementation of some form of small volume pilot system at our plant in Clifton Park. A small rig like this would really help to harness all of the creative potential that our current team has to offer, and this ability for the entire team to flex their creative muscles would undoubtedly foster greater company-wide pride and an even more rewarding work environment! Plus, it would almost certainly lead to the release of some pretty rad small-batch releases!

Q: What is your favorite part about working for the brewhouse?
A: Most importantly, it keeps me busy! For the most part I hit the ground running when I get to the brewery each day, and I never really settle down until its time for me to head home. I appreciate this steady but almost endless supply of work, and the intensity of each work week helps me to value the personal time that each weekend or holiday brings. I pride myself on what I’d call a rather potent work ethic, and this occupation feels like an outlet which I can really stretch myself and strive to do the best, most complete job possible.
The simpler answer is that we make beer; We get to physically enjoy the very fruits of our labor! Few things can compete with the ability to enjoy a glass of some tasty nectar that you built with your own hands!

Q: What is your proudest moment at SingleCut?
A: Amidst all of the growth and change that the company has endured, I still think the proudest moment for me was the first time I manned a brew to completion on the rig in Queens. Like many, I had begun working in the industry as a keg cleaner, scrubbing filth off of stacks and stacks of empty keg returns…and yet I did so graciously because I was on the track I so desperately wanted to be on. So the rather expeditious graduation to cellarman and then brewer did nothing if not bolster my sense of pride. And that exhilarating sensation of success after singularly completing my first brew, free of guidance, will forever be hard to beat. I had the knowledge, I had the control and I had landed right where I wanted to be! If that’s not what pride feels like then I’m not sure I know what does.